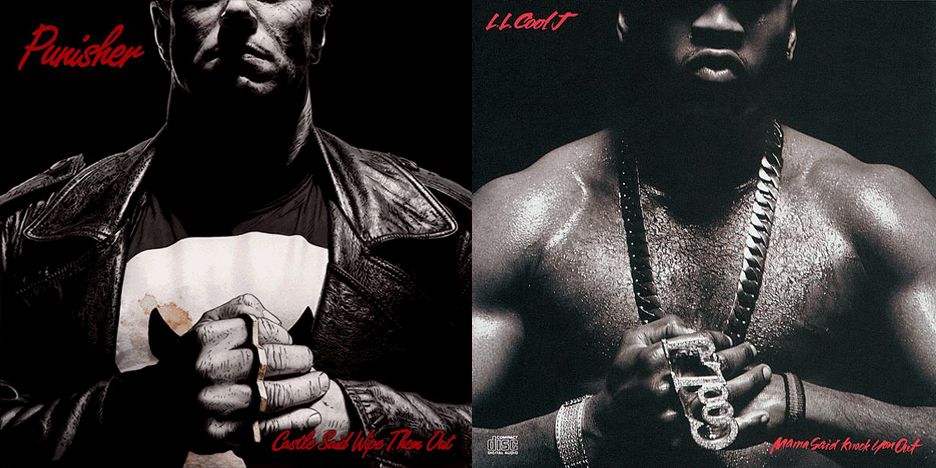 For those of you that might be unaware about my love of hip hop, be forewarned that it is a huge interest of mine and this blog will often take an in depth look at music that is engaging my attention currently. I also collect vinyls, mostly hip hop and rap, and so will take a look at special collections or different modes of listening to hip hop dependent on my mood, whether that be vinyl or streaming. Now to the subject of this post - UMe's Urban Legends label and Marvel recently teamed up to bring to life, on vinyl, 3 of the Marvel variant covers that Marvel has been bringing to the public since 2015. As Urban Legends wrote in their announcement post:

"We've teamed up with Marvel Comics to bring together the mighty, epic worlds of comics and hip-hop with an ongoing exclusive album series that will feature variant covers for select collector’s editions of some of the record label’s most legendary hip-hop releases. The first releases in this joint series, out December 7, are Iron Man standing behind cracked glass for 50 Cent’s incendiary 2003 debut, Get Rich Or Die Tryin’; the Punisher replicating LL Cool J’s famous stance on the cover of his 1990 album Mama Said Knock You Out; and Iron Man dueling Maestro, mirroring the cover of GZA’s second studio album, Liquid Swords.

Marvel Comics originally debuted these album art-inspired images as comic book variants for many of their top comic titles in 2015, reinterpreted by a number of fan-favorite comic book artists. Now Marvel’s highly successful variant comic book cover series will be combined with our massive catalog that includes the most revered and influential albums in hip-hop history."

Now these releases have me engaged for a couple of reasons. First and foremost is the aesthetic power of combining two of my favorite forms of entertainment, comic books, movies, and stories about the Marvel superheroes and classic hip hop and rap albums. As the statement above alludes to, Marvel began releasing comic book variants for their top titles in 2015. You can currently buy two volumes of books entitled Marvel: The Hip-Hop Covers Volume I and Marvel: The Hip-Hop Covers Volume II if you want to check them out. These immediately captured my attention when they came out. A few of my favorites can be checked out below. This whole project is cool because a) it's based on fan art; b) it combines the attitude and soul of the comics that are represented with the artists and the albums themselves; and c) it pays homage to the close connection that comic books and hip hop has shared over the years.

I want to pay a little more attention to the history of hip hop and the world of superheroes. Complex wrote a piece about Marvel hip-hop variants. "Speaking about the collaboration, UMe president/CEO Bruce Resnikoff said, 'Marvel comics have always occupied a special place in the hearts of hip-hop fans–both media continue to serve as source of expression, escapism and inspiration for generations of super fans around the world.'" This escapism is present in both hip hop and the world of comics; a perfect example of this escapism is alter-egos and hidden identities present in both worlds. Hip hop establishes this through stage names; hardly anyone raps under their birth name. There are some hip hop artists who take this to the extreme and perform with some form of mask and true alter-ego identity, such as MF DOOM or Ghostface Killah. Other rappers identify with comic book alter-egos such as Iron Man. Comics obviously are built around the premise that the individuals in these comics who have superpowers have built alternative lives to protect those identities.  Identity is extremely important to the human experience; these identities are a recognition that identity is all about perception and how we project ourselves and our story to the world.

Another reason the cultures of hip hop and comics often collides is because of their attitude, feel, and culture. "One of Hip-Hop’s defining qualities is its very lack of easy definition. It’s a style, it’s a culture, it’s an attitude.  Common usages of the term are applied to fashion, to dance, to visual art, to film, to people, to speech, to music. The criteria of what qualifies as Hip-Hop is purely subjective, and is the answer is determined equally by a work’s content and by the audience it reaches." Comics also embody this same lack of easy definition. The style and culture are ever-evolving, often driven by innovation of the creators themselves but also the fans who dedicate insane amounts of energy to the creators and their creations. Just think of the fervor around Comic-Cons and how hip hop and comics have both capture the pop culture imagination around the world with Avengers: Endgame representing the culmination of decades of work by Marvel and hip hop being the most popular global genre in 2018.

Outside of the aesthetics of the artwork and the significance of the project to both of my passions comics and hip hop, I was interested in picking up these first 3 vinyl releases because of the music itself. Below I have provided a brief recap and review of the 3 albums.

Tried to dip, but he dive, I socialize on vocal vibes
On tracks stabbed up with razor-sharp knives; Criminal subliminal minded rappers find it
Hard to define it, when narrow is the gate; For fat tapes and, then, played out and out of date
Then I construct my thoughts on site to renovate; And from that point, the God made a statement
Draftin' tracements, replacements in basements
Materials in sheet-rock, to sound proof the beatbox
And microscopic optics received through the boxes; Obnoxious topic, major labels, flavor tropical
Punchlines, that's unstoppable; Ring like shots from Glocks that attract cops
Around the clubs and try to shut down the hip-hop; But we only increase if everything is peace

Quick Thoughts: GZA in an interview with Wax Poetics said about this particular track, "I just remember sitting in the basement for hours and writing it over and over. I don’t know what actually transpired during the making of this. But as far as the song itself, it was another old-school hook taken from a crew we knew from the Bronx. They used to say something like: “And if you listen to me rap today, you be hearing the sounds that my crew will say. And we know you wish you can write them, well don’t bite them, well okay…” So I flipped it and said: “Well if you’re living in the world today, you’ll be listening to the slang that the Wu-Tang say…” and so on. It’s just another old-school hook we took and had some fun with." That's part of what I love about it; it has this deep old school vibe and starts with a bit of braggadocios attack at other rappers who are narrow minded and cannot compete with his ability to use free-styling to innovate the rap game. The whole middle section is what I particularly love about GZA, but the whole Wu-Tang Clan is noted for this skill, is the ability to demonstrate his expansive vocabulary in brutal rap metaphors and story-telling. Lastly, it comments on social issues where he says that hip hop actually is meant to increase peace and not violence and that police's early efforts to shut down hip hop were counter-productive to what the culture was actually trying to accomplish with its message. Check out this TED talk from GZA as a parting thought.

Title: Get Rich or Die Tryin'

Favorite Song: 21 Questions* There are other classics on this album that carry equal weight for me from a hip hop history perspective but I love the dichotomy of this love song being on this album. According to 50 Cent, “Dre was, like, ‘How you goin’ to be gangsta this and that and then put this sappy love song on?‘” 50 Cent responded saying, “I’m two people. I’ve always had to be two people since I was a kid, to get by. To me that’s not diversity, it’s necessity.”

If I fell off tomorrow, would you still love me? If I didn't smell so good, would you still hug me? If I got locked up and sentenced to a quarter century
Could I count on you to be there to support me mentally? If I went back to a hooptie from a Benz
Would you poof and disappear like some of my friends?

Quick Thoughts: I like these lyrics in this verse because it is 50 dealing with the constant anxiety seemingly present in hip hop that people are only associating with them and supporting them because of their success in hip hop and that they either did not support them on their come up while it was a lot grind and hard work and only now are showing their support OR their friends will abandon them if they were ever to stop being famous. This time expressed as questions to a girl as if they are playing the game 21 questions. This album was 50 Cent's first studio album and had production from Eminem and Dre. It was a statement album to the rest of the game from the Aftermath label that they were a dominant force to be reckoned with in hip-hop at the time. 50 also has this weird thing about him as a rapper that when you look back to the time when he was popular, he dominated the radio with songs that continue to have longevity and get played as "classics" of that era but in terms of talent and skill was still seen to be a bit of a gimmick when compared to the lyrical dexterity of Eminem and others at the time. However, this is an instant hip-hop classic with some bangers that will be forever immortalized and connected with Iron Man in this hip-hop reissue.

Title: Mama Said Knock You Out

Don't call it a comeback,I been here for years; Rocking my peers and putting suckas in fear; Making the tears rain down like a monsoon; Listen to the bass go boom
Explosion, overpowering; Over the competition, I'm towering; Wrecking shop, when I drop; These lyrics that'll make you call the cops; Don't you dare stare, you better move; Don't ever compare Me to the rest that'll all get sliced and diced; Competition's paying the price

Quick Thoughts: He put on one of the most high energy concerts that I have ever scene. His impact on hip hop is just as great as the energy that I felt at that show. Genius reports this about the genesis of this album, "LL found himself being criticized as lazy, a sellout, and out of touch with the current climate of hip hop. After a conversation with his grandmother about the criticism where she responded, “Oh baby, just knock them out!”, LL was inspired to make his next album “his most aggressive work to date, a rough, streetwise album”. That vibe comes through in that album and personifies everything most people remember about this rap icons musical contributions. I love this lyric because it starts with the statement that this is not a comeback but for LL it was in a way and the rest of the lyrical verse finds LL bodying other rappers and letting them know he is back with a bravado that only he can bring to the mic.

I'd highly encourage anyone who is interested in hip hop history or has a penchant for the Marvel comics universe to pick up these vinyl collector edition albums. What is your favorite album of these three? What do you think of the Marvel Hip-Hop variants? Which one do you want them to issue next on vinyl? Leave your comments below!